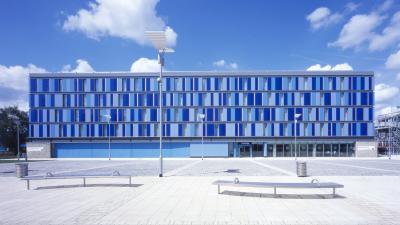 This 120-bedroom budget hotel with retail accommodation is part of a wider regeneration initiative located in close proximity to the Cambridge Railway Station and the heart of the city.

The site is located between two very different character areas in Cambridge: To one side lies the busy Hills Road and bridge over the railway- a gateway to the city from the south. On the other, a new piazza forms the focus of an arts and leisure complex of cinemas, music venues and theatre.

The challenge issued by the Cambridge Planning Department, for this winning submission in a limited competition, was to investigate considered alternatives to the banality of ‘conventional’ budget hotel design.

While accepting the basic pragmatic and economically driven format of budget hotels, in both organisation and room layout, the design concept responds to the specific urban qualities in form of two distinctly different facades:

To the piazza, a staggered pattern of 78 vertical blue light boxes proffer a multi-hued backdrop, which when illuminated engages with the night-time activity of the new urban square. To the Hills Road frontage, a horizontal banded composition employs a selection of timber species, contrasting metal surfaces and projecting ‘blinkers’.

The design of the facades is inspired by the First World War naval designs for ‘dazzle’ camouflage prepared by artists such as Edward Wadsworth in an attempt to “produce an effect (by paint) in such a way that all accepted forms of a ship are broken up by masses of strongly contrasting colour, consequently making it a matter of difficulty for a submarine to decide on the exact course of the vessel to be attacked”.

"…in its Cambridge Hotel and its modular housing for Peabody, Proctor and Matthews has proved that decent innovative design pays, and has raised the game of otherwise formulaic architecture." Building Magazine, October 2004