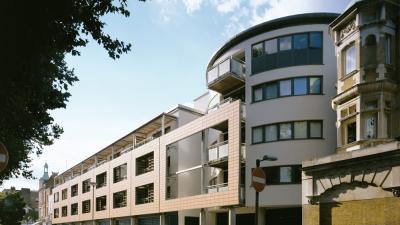 Opportunities for new housing in London often rest with the problem of rebuilding within dilapidated parts of existing urban blocks. Typically these opportunities are on smaller sites that have to co-exist in the diverse context of existing districts, containing buildings from various periods, styles, and with different geometries and alignments. The Chronos Buildings occupy an urban block at the corner of two major streets, Mile End Road (a major east-west street ) along the south side and Cambridge Heath Road to the west. The site, a former vehicle depot, is located in the historic Whitechapel conservation area and is adjacent to the 17th Century Trinity Green Almshouses on the major eastern approach to the City of London. The project supports a mixed development of 59 apartments, six town houses, six retail units and a restaurant.

Responding to the varied urban context of Mile End Road the scheme is arranged in three blocks, one repairing the Mile End Road frontage  and the other two enclosing a quiet mews court to the rear.

The infill building to Mile End Road is expressed as a four story high continuous terrace, which transforms to a 5-story cylinder at the east end, both finished in white render. A galvanized steel frame is expressed as a tectonic element which is 4 storey’s high, it is supported on round columns to form a loggia over the ground floor retail elements, a terracotta screen with large rectangular openings over 2 storey’s and an open trellis at the roof. The terracotta screen creates a layering to the street façade, providing a planar continuity to the street as well as providing a continuity of scale with the existing 3 storey buildings immediately adjacent. The recessed depth behind the screen accommodates balconies for the apartments and provides shade and a buffer to sound.

The five storey rotunda provides a geometric transition between new and old, and marks the new pedestrian entrance to the courtyard behind. The terracotta screen is extended past the rotunda element as a partially freestanding element with cantilevered balconies hooked within and to assist to make a spatial adjustment between the rotunda and historic building next door.

Within the site, a double row of 4 storey terraced dwellings and apartments is set perpendicular to the Mile End Road block, aligning north south to form a mews courtyard. A layered zone combines screen to hold bin stores, stairs (leading to the  upper and lower apartments) and balconies. Vehicle parking and tree planting are distributed between.

The design was developed with the active support of the Royal Fine Art Commission and the Ancient Monuments Society.

‘Proctor and Matthews has found a new model for high-density developments that breaks away from the boxes that still make up most developers’ output and it’s both private and communal.’