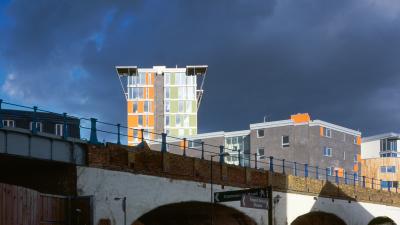 Norway Wharf is set on the edge of the Limehouse Cut Canal within the sensitive St Anne’s Church Conservation Area. Comprising of 73 apartments, Norway Wharf is designed to encapsulate and enhance the surrounding area’s most attractive features by incorporating them as part of the scheme.

The building forms are oriented towards the canal, adjacent Limehouse Park and views of St. Anne’s Church. Loosely wrapped around a central landscaped courtyard, the buildings form a protective skin around residents’ amenity spaces away from the DLR rail line and roadway towards the south and west respectively. The building forms and open spaces are configured to establish a coherent relationship between the public, semi-public and private parts of the scheme.

A slender 12-storey tower provides as a focal point and is identifiable from a number of key approach routes leading towards the site. The tower, which is situated away from the rail line, is oriented to take advantage of views across the park and canal as well as maximising opportunities for southerly aspect. Similarly, a five storey rotunda provides as another identifiable feature. Terminating the axis between St Anne’s Church and the canal, its form helps to complete the scheme’s water frontage.

The façade’s design and materials palette was composed to sensitively respond to the site’s conservation context whilst also a creating a distinctive character. A gradation of green and timber façade panels not only help to blend in with the building’s established landscaped surroundings, but also create a domestic sensibility to the overall design.