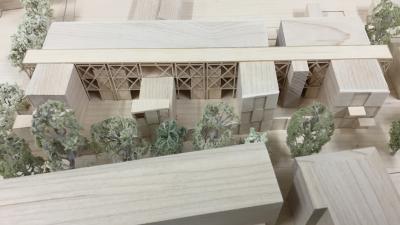 This invited competition for the new graduate accommodation of Churchill College Cambridge was inspired by historic precedents including 'Heraldic' iconography prevalent in many college gatehouse lodges.

A ‘loggia’ promenade that runs the full length of the site provides a strong identifiable design element to the project. Fully glazed along its eastern facade, its ‘openness’ towards the landscaped courtyards and communal spaces draw focus towards the scheme’s more social functions. As the building’s principle circulation space, the ‘loggia’ provides access to both private and communal spaces.

In reference to the Churchill College crest, another key identifiable design element is the building’s ‘chequerboard’ perforated brickwork facade. Wrapping around the building’s full perimeter, not only does it visually unify its overall form, but also provide a strategy for natural ventilation and privacy to the external courtyards.