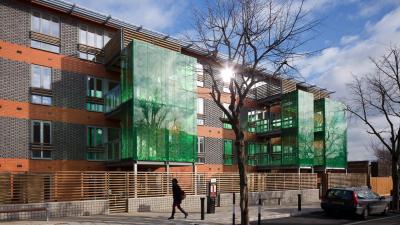 The site at Station Grove was formerly a builder’s yard. Set very close to the main west coast railway line this small plot has two very distinct boundaries, one onto the railway corridor and the other into an existing low rise early Edwardian street of terraced houses. Both the noise and vibration from the railway line required a design at the early concept stage that could be tested for acoustic performance and limit the expensive construction required for the footings which needed to isolate the superstructure through vibration pads from the foundations. The site constraints essentially required a single aspect design at quite a high density to allow the project to be viable.

This simple four storey linear terrace of apartments creates a street edge relationship that follows the 19th Century and early 20th Century urban morphology of the surrounding neighbourhoods, providing a clear hierarchy of public and private realm space and street continuity. The design ensures that all apartments have direct views into Station Grove giving them a westerly aspect. The street entrances are incorporated into the design of the balcony structures at either end of the terrace making them clearly legible to residents and visitors.

The principal elevations employ a variety of materials. Bricks of differing colours and textures have been used for the principle envelope of the buildings and street side boundary walls. Brickwork has been detailed with horizontal banding at each floor level infilled with panels of dark split brick bonding. This has been detailed to give modulation and texture to this simple wall plane.

Inevitably with only one aspect at four stories onto Station Grove the neighbours opposite raised concerns about overlooking. The planning authority was also insistent that despite the higher density sufficient external amenity space should be provided. Both these issues were overcome by a balcony design that incorporated screen printed privacy screening. Set against the façade facing Station Grove are a series of light steel balcony structures which provide a counterpoint against the brick elevation. These structures have been configured to give articulation to the terrace, (in a similar way to bay windows on the terrace opposite) while at the same time celebrating the entrances to each group of 12 flats. The spatially generous painted steel and timber balconies allow views up and down Station Grove and have been clad on the roadside elevation with glazed screens that incorporate screen printed abstract leaf pattern artwork. These screens while allowing light through offer privacy both to the occupants of the balcony and the houses across the street - in effect delivering external rooms.

The rear elevation (facing the railway) incorporates a similar layering to the Station Grove elevations. Brick again is used to the main façade, but the entrance areas to each unit and access ways are animated with a similar semi-transparent wall. At night the coloured storage boxes for each apartment can be seen glowing through the translucent screen. This provides day lit spaces on entering the apartments and delivers an acoustic buffer to the railway on the north eastern boundary.

The area to the rear of the apartments provides generous entrance lobbies affording plenty of space for bikes, scooters and buggies etc. In addition, the plan incorporates storage units for every flat: an innovation based on European models. This provision eliminates the cluttering of gardens and balconies with belongings and frees up amenity spaces for the purpose they are designed for. The client has welcomed this approach to storage: an innovative response to overcoming a recurring problem in affordable housing.

The project was designed and constructed for Network Housing.